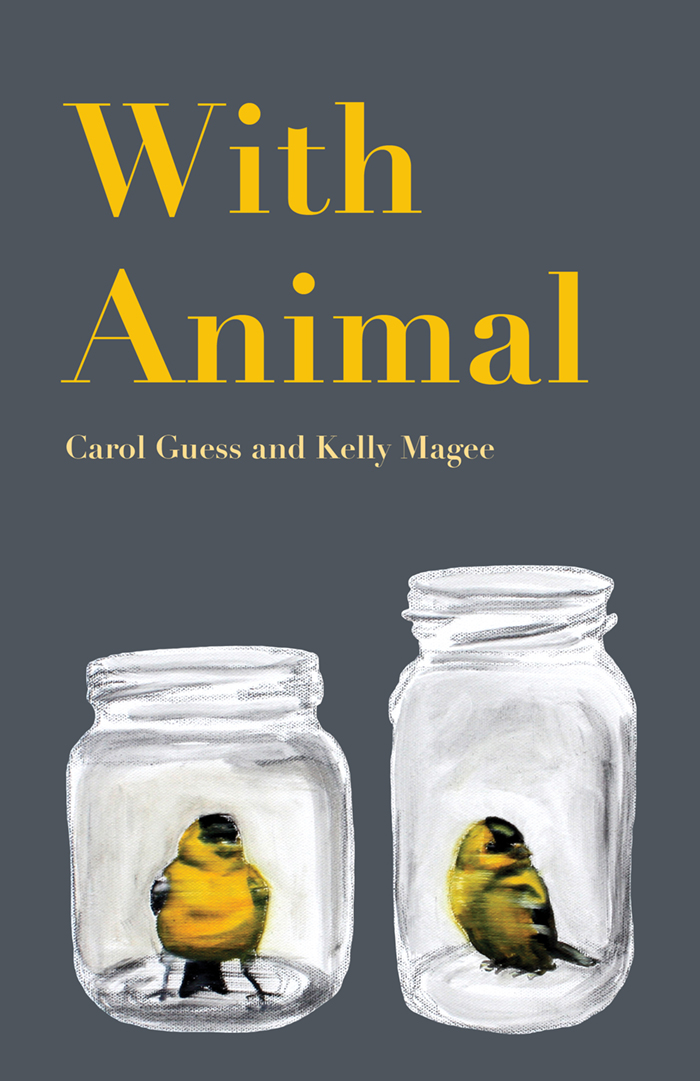 With Animal, a review

In the manifold worlds of With Animal, pregnancy is a tricky creature. There are online message boards for humans having dragon babies, and special hospitals for animal births. In some of its stories the birthing of non-human progeny seems perfectly commonplace. In others, the rights of animal children, like those of their often queer parents, are threatened on various sides; non-human babies are taken away at birth, and in one case a mother, becoming sheep herself, flees her human home for the safety of the flock. Some parents have individual children, one woman gives birth to a swarm of killer bees, and for a teenage girl pregnant with jellyfish, birth is a continuous process.

With Animal is the literary progeny of Carol Guess and Kelly Magee, both separately published writers and colleagues in the English Department at Western Washington University. Made up of 27 stories, the collection feels rather timely. With Animal was released by Black Lawrence Press in 2015, the same year as Maggie Nelson’s portrayal of queer pregnancy in The Argonauts, and a year after A.K Summers’ brilliant graphic memoir Pregnant Butch: Nine Long Months Spent in Drag. It doesn’t seem overly optimistic to regard these books as speaking to an - albeit U.S. centric - desire for non-heteronormative accounts of reproduction, for accounts that speak to the messiness and strangeness of pregnancy and birth, and for feminist, pro-choice narratives of conception and parenting.

Some of the book’s pregnancies are unplanned and even unknown; others are planned, with older parents whose human-producing days are over being offered a choice of their child’s species. Characters are anxious about their ability to conceive and they worry about being good enough parents. There are animal parent support groups, and animal child activists fight against those who express such sentiments as, ‘You animal parents are the worst kind of breeders’. Speaking perhaps more to queer readers, one parent is frustrated with gendered clothing, a coded-as-cis man wears a strap on artificial womb, and in the futuristic ‘With Plush’, polyamorous parents teach their offspring about a time when only women could reproduce. This melding of experiences, anxieties and frustrations, recognisable and relatable to many readers, would suggest that imagined animal pregnancies offer fertile ground for debates about the future of human reproduction. But Guess and Magee’s hybrid animal/human families confound simply symbolic or speculative readings. The story ‘With Me’ is the only narrative told from the point of view of the animal child of human parents, and is perhaps the saddest story in the collection. The result of a lab test gone wrong, the narrator’s suffering at the hands of their scientist mother offers a nuanced critique of animal experimentation and incarceration. The book’s epigraph is a quote from Steven Wise, the U.S. based animal rights campaigner, and in their acknowledgements the writers thank the Non Human Rights Project for its work. Tenderly developed, ‘With Me’ enacts a touching and acute call for greater self-reflexivity in our interactions with non-humans that runs throughout the book.

Far from utopian or politically didactic, the characters regularly confound us with their messy ethics and unpredictable approaches to parenting. And it would be difficult to describe with any certainty the physical limits of the worlds they live in. This makes sense when you’re aware of Guess and Magee’s collaborative writing process. Every week, they would write half of a story each, and then, after swapping beginnings, would complete the other’s work, rarely changing each other’s words. Therefore, each could begin a story without knowing where it would end, and would end a story without having had control over its inception. Like a game of consequences this approach seems to facilitate the particular aptitude of the short story form for narratives whose stakes do not need to be mapped out to the Nth degree. Rather than working with fully formed dystopias or futures, the stories are speculative and often surreal, offering readers the pleasure of immersing themselves briefly into a fantasy that need have no perceptible logic. Occasionally blunt in tone, they perform a kind of humour that calls to mind Lydia Davis’ brilliant absurdism. There are also non-animal, even non-organic, pregnancies, expanding the possible meanings of that state. ‘With Storm’ tells the story of a girl’s intense desire for a hurricane. In ‘With Racoon’ pregnancy emerges as a metaphor, speaking to the process of creating when the crane-operating narrator describes themselves as being ‘pregnant with buildings’. In the shortest and perhaps oddest story, a girl becomes momentarily ‘pregnant with statuary’’ after being tied to a stone lion.

The worlds of With Animal are also decidedly, and deliciously, queer. In addition to the many lesbian relationships and characters depicted, the stories explore potential near-futures, offering re-imagined gender roles, described by ambiguously gendered narrators. More heteronormative relationships often hover closer to near pasts than futures, such as when, in the aptly named ‘With Human’, the narrator considers that, ‘It wasn’t her fault, her husband reminded her. His DNA decided things. He was the carrier; he was the male’. The book doesn’t so much privilege queer families over straight ones, rather it presses playfully upon both the urgency and the capriciousness of desire. The stories’ queerness lies as much in their multifaceted representation of queer lives and loves as it does in the way they seem to refuse idealised or normalised family narratives, inviting us instead to engage imaginatively with the endless possibilities of what might a family look or feel like. Both Guess and Magee teach queer studies, and identify as queer themselves. When I reached out to them about writing this piece they responded with an openness and enthusiasm for discussing their political investment in the term queer, which Guess described as a means of aligning oneself with a larger set of contemporary social justice movements, and of asserting the importance of intersectionality in our understandings of gender and sexuality.

My own sense of the manifold potential of queer storytelling comes together in one of the earliest stories, ‘With Fish’. The story plays with its reader’s potential expectations of queer family making, the narrator telling us of her partner, ‘It killed me that I couldn’t give her fragments of my DNA; that sex between us was always just sex.’ And then a sentence later: ‘No. It didn’t kill me at all. I thought it was funny ordering sperm in the mail. But queer are supposed to feel apologetic about these things, to make up for the fact that sex is pure pleasure.’ Like so many of the stories in this collection, ‘With Fish’ is gorgeously erotic, mixing elements of fantasy with images of intimate domesticity: ‘My girlfriend in the bathtub, pulling my hand between her legs. When she came, the school inside her swirled into a glittering bait ball.’ In perhaps my favourite moment in the collection, the fish are born, and then skittishly rush back into their mothers’ body, witnessed only by her partner. There is something compelling about the agency of the fish, presented here as actively birthing themselves, rather than being the passive product of reproduction. But most striking is the disruption of a linear narrative that would put pregnancy first, then birth, and then parenthood. Guess spoke to me of the importance that challenging normative fictional structures holds for her, suggesting that the magical realist elements of the text are themselves queer. As a teacher, she told me that she encourages students ‘to abandon the predictable “conflict, crisis, resolution” triangle, and to move readers across the page in new and unusual directions.’ In ‘With Fish’ this spills into the way that readers are moved through the processes of reproduction: rather than simply reproducing normative narratives of reproduction, the magical realist form of the text allows us to imagine other, queerer, non-linear birth stories.

Continuing with the biblical theme introduced in ‘With Locust’, the final, eponymous story of the collection offers what one might think of as a queer feminist take on the immaculate conception. In this version, to use the writers’ phrase, the Virgin Mary is a queer single parent, confused by her pregnancy because, ‘though she’s participated in plenty of original sin, it hasn’t ever, to her knowledge, involved sperm’. For a manger, she has Joe’s Petting Zoo, and as for the birth, ‘There’s nothing peaceful about it, just slop and goop and grunting’, producing a child with ‘feral teeth and prickly paws that grope for teats’. Magical, and strangely spiritual, the story takes place in a vacuum of time and space, the outside world changing while parent and child are holed up in a motel, helped by a mysterious protector who leaves them milk and soup in the hallway. The narrator considers naming the animal Unexpected, Jesus, or Online, before settling on Mary Todd Lincoln. When the time comes to leave the motel, she dresses Mary Todd in a dress and wig, leaving us with these final thoughts: ‘This is what parenting is, she thinks: you stuff your animal into human clothes. You walk into the world disguised. What a beautiful girl you have. So pink. Mary Todd smiles, showing animal teeth.’

In a way it seems like the book has been building up to this final image, its stories consistently pressing upon, even dismantling, the ‘naturalness’ of normative gender designation and presentation. And by this point, the title of both the collection and its final story have become a gathering device, holding together the accumulation of images, moments, and narratives thattrouble any easy distinction between ‘human’ and ‘animal’. On the one hand, With Animal puns the now anachronistic euphemism ‘with child’, the understatement of the phrase in comical contrast to the exuberance of the collection. But the title might also point to an expanded vision of family, potentially offering imaginative spaces in which to re-orient this word, one that has offered so little to so many. ‘With’, after all, has many resonances, and can be shorthand for all kinds of intimacy, love, and agency. The children of this collection exist in relation to the parents, but the bond is not pre-ordained. The stories are not didactic, but if they do have an overall ethics it is one that states that we are all animal, with, rather than despite or beyond, species, gender, or taxonomy. Guess told me that she ‘wanted to convey something of the animal-ness of our human bodies. We can clothe ourselves in finery, but at the end of the day, our bodies are constantly oozing and clicking and decaying and betraying us.’ This is the thought that reaches efflorescence in that final image of the animal stuffed into human clothes. And as in the final image, the singularity of ‘Animal’ foregrounds the importance of recognising the particularity of all animals, bodies and lives.