DRAG ME TO THE SEAS, THE SEAS 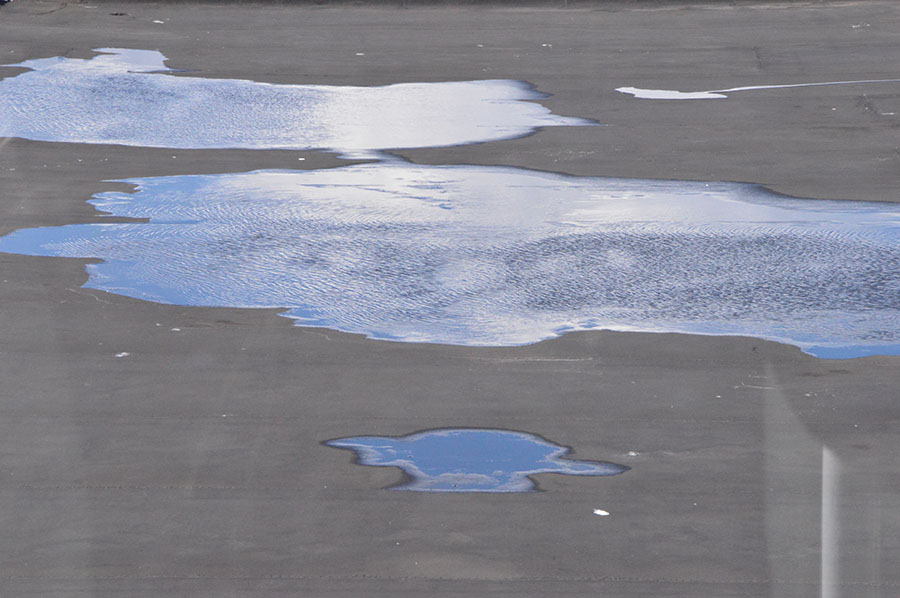 Here she is amongst the witch-grass, white at the edges with moonlight. Her ghostly figure blurry at the edges from my floating position down below. I can tell she’d whisper in my stone-cold ear things that would makeeven my hard heart melt, touch colliding with my swooping stomach, nerves shaking themselves to life again. She remains solitary. Like a rock embedded in wet sand, clinging clumps of sediment holding her steadfast and I come to hear her louder, louder, now.

Tongue running up my neck and in my ear, warming stone with flesh.

My marble double. Eaten up by sea wind and rain I am mostly ignored, but on occasion attended to by the lone visitors that come to circle our raised forms. They behold me lurching forward, my expression of distress lost to the years of English coastal weather, carved hands clasped around his neck in apparent desperation (although how you’d tell I’ll never know, I could be wringing his neck). In this pose they inspect what remains of my face, features blurred and softened, grief corroded. So many seeking hands have caressed my hair, my forearms; fingers first attempt to know why I kneel on this concrete curve, unseeing expression, reaching around the one I never see. We remain a memorial together, entwined. Although I’m slowly slipping off my pedestal, called away to wallow in other times.

My scale is within that of human size — but the romance of my figure makes me slightly larger I suppose. If I could step out from under my heavy, sculpted veil and jump down onto the surrounding grass I might. Covered by the dark, flesh becoming warm again, blood filling up my lightened body I would run. Over trimmed grass and through the line of thinning bushes to the tarmac strip that lines the coast. I’d climb over ice-cold railings and contemplate the jump, tripping over the lip of the promenade and down into the sea. Limbs awakening, swept up and held by the current. My stiff knees stretched out and head lifted I would see the sky again; floating on my back, every tiny hair prickling in the gloaming.

The first one I noticed approached with small and slow steps. She was there to linger and placed her hand on my waist, gathered fabric underneath her searching fingers that paid attention to the hard curves from my waist up to the nape of my neck. Fizzing and twisting. Her touch was like no one else’s and she approached the usually overlooked parts of my body with a kind of care. A conscious regard for their contours, finding the dips and rises of my wrist bones and the bumps of my vertebrae as if they were new, undiscovered forms. She was attentive with eyes as well as hands; her glance stayed steady as it moved over the spreading lichen and algae, dense over my forehead and down through my waves of hair that are almost knotted, piled on my sloped back and settled, ample and leaden, waiting to animate again. My head is crowned with a thick plait that mirrors the one falling down her back. It sways slightly as she treads around my base, voices whipping past on sea winds.

Her touch gave me a reassuring heat. One that belied the chill I knew was in the air, and made me wonder why I had only now begun to feel. I was sure I’d numbed myself to searching stares and hands alike, but what this began was stranger still. The time I thought I knew was slammed up against my side, crushing, splitting and we fell, bewildered and strange, littering the ground with shards that were swiftly swept away.

But even in my state of impermanent in-between I drank in the first delicious flood of sunlight and could almost feel it warming me. Feeling returning to my skin, surface stinging, convinced I was growing. Hair curling, pupils shrinking, until it was hot, too hot and beads of sweat trickled down my temples over the curve of my jaw and into the sea. Thirsting, but always wet.

My murky bulk is now weightless and tinged green, strands of seaweed caught between the toes I can’t remember ever touching. Stone-skin shed for now, I see shards of light hitting the water. Lifting my mood as they skip over the surface of my face. For now, darkness seems to be a rare relief — days are thick with heat and stretch out like never-ending roads. There is little I can say about this heat except that it changed everything. The constitution of all objects — land mass, water and even my own body — were altered in ways I couldn’t understand, but now experience with mild interest. Seeing as I can’t remember what sensations were like before, it doesn't matter now, but I was surprised by the suddenness with which this heat descended — like a theatre curtain dropping, lights and glimpses of shining teeth obscured. I felt my temperature creeping up, flushed and choked whilst being thrown around by summer storms. A slamming of my weight on water hard as stone, dragging me under deep and sucking me up again. A mess of insides trying to contain themselves inside my battered skin, heavy strips of hair wrapped around my face like dank and tangled ropes.

In my turn I’ve touched the rocks, felt their hard barnacled surfaces and been sure of their inert response. I’ve draped my back across their dense shapes and cut my hands trying to cling on. Criss-crosses sealed with salt and a reluctance to damage the surface of my body in the face of a more resilient object. Imagining slippery laps of clear water on my lower back where I can feel the bruises forming. Blooming, blushing bruises in gorgeous plummy purples and delicate greenish-yellows spreading from the sea bed up through the rocks and over my greying skin. My daring rocks. One with a flat-ish base that slopes up and plateaus to form a curve that fits my head and neck; my spine follows its dips and peaks. Pressure points where the rock pushes into my skin go numb and make my back feel like it’s disappearing, drifting away with the current. A floating head, detached. It’s easy to lose track of my body — I rarely see it any more. The sole reminder of its existence is when I can feel the girls — my tender, hopeful visitors in search of a stone celebrity, their cause célèbre. I am adorned and left reluctantly with wilting bands of bay to boost morale and remind us of the power we have to choose our own idols. They crown me with their hot tears, somehow moved by the slim facts that make up my life. I’m their mirror image, marking time; 950 years down and who knows what to come.

What they see is the undoing of a corpse, bit by bit (bite me) my limbs stiffened.

The second girl came when I was soaked in late afternoon sun. Golden and fading. She moved not like the first but as the swirls of water that get caught between the crevices of rocks; that is to say, with a rush that was not impulsive, but uncontainable. She spoke no words but an outpouring of musical sounds which, filled with all the intricacies of desire, gathered in me like threads. Woven through my atrophied muscles and sluggish veins. This takes me by surprise even now, when, in my groans and gasps as I scrape against the rocks I repeat her sounds without intention. Flooded with the noise of one whose hands and arms — for she grazed them along my skirt as well — took in my centuries of matted thoughts and displayed them to me so vividly. With brazen eyes she heaved herself up and sat upon my back. Her weight was familiar, damp and warm in the dense August air that carried wafts of Russian Sage as it it cooled. And as she settled herself —the palms of her hands firmly placed on each of my hips — she pulled off her back a web-like shape and threw it to the ground. The careless movements she inhabited were reflectionsof my own. I’d felt the surge of reckless urges, the desire to throw myself around with a seeming generosity, movements only softened by the hours of evenings passing.

I could picture every fine hair on her body blown gently by the wind as she watched the sea through hazy air. “Growing up”, she said, “I had a swimming costume printed with shells and buckets. Soft, but faded blue and limp. I longed for the sleek navy costumes that surrounded me, so jealous of their bodies all held tight”.As she spoke she gratefully drank up the cool breezes when they came, brief but relieving. When she turned to face me I could see my once sweating, glistening body reflected in her sunglasses.

Third girl; I could smell the seaweed on her.

Thick with sleep she lifted up her head and, swaying slightly, she explored the stickiness of her breasts with interest. Lurching to her feet beside me, struggling with the silk of her dress, she pulled it over her now unadorned head and it slid to the floor in a pool of blue. Sighing. Blue, but with no crest of wave or breast, and her own chest cupped by soft biscuit coloured almost-ovals and held together by a clear plastic clip. Her silken form would only be remembered by the middle-distance photographs of her, taken hours earlier, in which she was seemingly smiling and content, hand gently resting on my skirt. At this distance her chest was smooth. No hard, dark nipples interrupting the fabric, ensuring the path from her neatened curves fell deftly down her bare arm and through the palm of her hand to the surface of my lower back.

But as she casted off unwanted clothes I realised she was soaked. Tributaries of black making their way from her eyelids to her chin. Hair plastered to her shoulders she sank down again and leant her back on me. The warmth of my form, still stored from the day, now sprawling over her salt-tight skin. And as I felt her heating up, the chill I received came with the sight of her struggling, limpid body being dragged up and down by steely waves. Just like I would be; the slap of skin on the glassy surface ringing in my ears. The dreaded rushing sounds.

It helps when there’s a storm, I can’t hear my thoughts. But I do feel the hardening bodies that sink slowly to the sea bed. The thump as they land. Eerily green with drifting strands of hair, just like they dove into a pool and allowed themselves to flip over, face-up, enjoying the moments before the calm disappears and the body breaks the surface. I’m unfamiliar with this new shape, so unused it feels that grains of sand are huge rocks under my feet. The quiet I am left with echoes that of distant waters. Shattered, but in my smallness I still disrupt the tides, a juncture in the rhythm. All aswim.

Sea-sick and left to either float or drown.