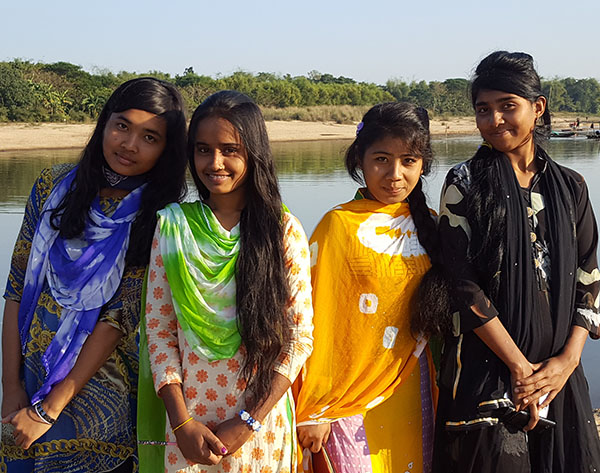 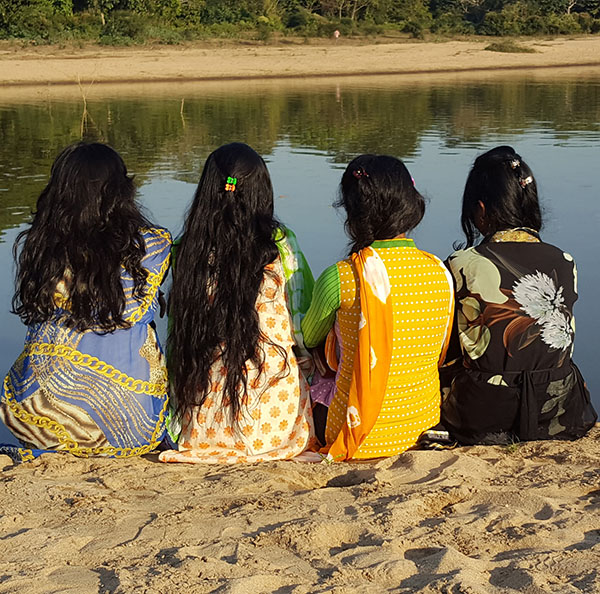 ‘We face harassment every time we go outside’: how young women in rural Bangladesh are struggling to stay educated

While working on education and gender equality projects in rural Bangladesh I have had the opportunity to talk with many bright, young people, including four young women named Kona, Sheba, Nila and Merilla. These girls, all between the ages of 18 and 21, have already overcome a staggering number of obstacles to remain in education and they are set to face even more obstacles as they attempt to enroll in higher education to train as nurses and teachers. It became clear through our conversations that - although these young women live in relatively poor, rural communities - the greatest obstacle they face is not a lack of resources or facilities in their schools, but rather a systemic belief in their society that they don’t require or deserve an education.

Out of any of the misconceptions you may have about young women living in rural Bangladesh, the most important to cast from your mind is that women like Kona, Sheba, Nila and Merilla are not modern women. They have smartphones, they use social media, they are engaged with global issues, and they discuss their career aspirations with the same rigour and enthusiasm you would expect from any young modern woman. They are also painfully aware that none of this means anything if they aren’t able to further their education.

Nila: No one in our society respects you if you don’t have an education.

Kona: If there is a community meeting, the educated people are the ones who are listened to, but these are never women. That’s why it's important for girls to get educated.

However, getting an education is often not an option for young women in rural Bangladesh, and not because the education isn’t available, but rather because their communities view it as both unnecessary and dangerous.

Sheba: Men dominate our society. They know that if we get an education and become equal they will no longer be able to control us.

This is a familiar narrative for young women being oppressed by patriarchal cultures all over the world. For Kona, Sheba, Nila, Merilla, and the girls in their communities, this oppression manifests itself most commonly in the form of verbal and physical harassment, or early marriage. Harassment and marriage are highlighted as the primary obstacles to girls’ education. Bangladesh has the highest rate of child marriage of girls under the age of 15 in the world, with 29% of girls in Bangladesh married before age 15, according to a UNICEF study.

Nila: In my village there are only three girls out of twenty who continue to study. For the rest of them their parents think early marriage is the best option...

Kona: ...and when these girls bear a child they face lots of health problems and their children face issues as well because they are underdeveloped. Also, because they're so young, they can’t argue back and don’t know their rights or how to deal with their father or mother-in-law.

As well as the obvious health problems, Kona highlighted that victims of early marriage are likely to suffer from verbal and physical abuse from their family-in-law, a point that was quickly supported by the other girls.

Merilla: In my village there was a girl who got married early and the mother and father-in-law always fight with her and torture her physically.

Kona: In my village a girl was married at the age of 13 and was tortured so much. She was eventually found hung by a ceiling fan.

As shocking as these stories are, they were told with a sense of reluctant resignation, because this is a common reality for many of these girls’ friends and family members. Although not all young women are affected by early marriage they are all still affected by a systemic lack of interest in or understanding of the importance of their rights, including their education.

Sheba: Parents aren’t aware enough about girls’ education. They believe that if we are in higher education or become educated then we won’t listen. They know we’ll get more freedom and more freedom means that we might run away with someone we love and leave the family. They prefer girls to stay at home, cooking.

A recurring theme in many of these conversations was a pervasive attitude that women are naturally immoral and easily corruptible, and this presents itself most blatantly and dangerously in the practice of eve teasing. ‘Eve teasing’ is a Bangladeshi euphemism for sexual harassment that can cover everything from verbal harassment to rape and acid-throwing attacks. Punishment for eve teasing is usually a couple of months in prison or a 2000 taka (£20) fine. Reports are largely dismissed and it remains a persistent issue for young, Bangladeshi women. Eve teasing has also moved online in recent years, meaning that girls now even feel unsafe in their own homes. Kona is only 18 and is already well versed in the various forms that eve teasing takes.

Kona: I was eve teased by a boy recently who and grabbed my hair clips and pulled my hair. I asked for them back and he refused. He then tried to grab my bag and my phone to give me his number and shouted at me when I refused. This was on my way to college. Every evening on my way home after volunteering I get shouted at and hear negative comments asking why I’m out at night. They also write messages on our social media profiles and assault us online. Recently someone created a fake account in my name and wrote posts asking men to come meet me in my village for sex. It is easy to download someone's photo and pretend to be them. That account is still active now.

Nila: We face harassment every time we go outside.

Eve teasing is one of the primary reasons that young women in rural Bangladesh drop out of education because, either through their parents’ or their own sense of shame and fear, they decide they simply cannot risk going to school. There is also no support system for victims of eve teasing, even within peer groups.

Nila: Other boys and girls, even friends in our class, don’t help because they say, ‘you must not be a good girl, this is why you get eve teased’

The fact is that these girls are not only the victims of this abuse but are also regularly accused of being the perpetrators. If they get verbally or physically abused, it is their fault for deciding to get an education or leave their own homes unaccompanied. In the most extreme cases, eve teasing can be fatal. Just before I arrived in Bangladesh a 14 year old girl in Dhaka was stabbed to death by a group of young men while walking home from school, simply because she fought back. I asked Kona, Sheba, Nila and Merilla what they thought the solutions to these problems were. They told me that the solution must start with educating parents about the importance of girl’s education. After this, they said, you need to focus on the wider community, especially young men who are Bangladesh’s future husbands and fathers.

Nila: The first barrier to a girl’s education is their family. It is up to the parents completely whether a girl gets educated. Once you’re married and want to continue your education it is up to your husband and he is unlikely to allow you because he thinks you will be away at university with different men and have affairs.

When people think about improving education in developing countries they often think of building classrooms and resources, and although this is undoubtedly important, it’s clear that for these young women the more pressing issues are the toxic and ingrained attitudes that are stopping them from getting an education or furthering the education they have already been fortunate enough to receive. Despite this, not enough charities or NGOs focus on these cultural issues as a crucial part of tackling girl’s education, in part because improvements in global education are primarily measured by enrollment. Bangladesh ranks 72nd in the 2016 ‘Global Gender Gap Report’ and in fact receives top marks for primary and secondary education because of the numbers of girls who are enrolled in primary and secondary education. However, enrolment does not accurately represent the challenges these girls face outside the classroom or what real investment is being made in their futures.

In order to combat these issues and make a sustainable change to attitudes towards women’s rights and education, girls and women need to be able to access safe spaces to discuss these issues and take part in initiatives to raise awareness within their communities. Being able to learn from one another creates opportunity to galvanize and build momentum. I have seen first hand how much confidence and experience Kona, Sheba, Nila and Merilla have gained from working on awareness raising community projects and how much the girls who’ve attended have gained from seeing real examples of female leadership and empowerment.

However, in order to get the message about girls’ education across, this awareness raising needs to focus on the fact that girls’ education is not an isolated or female-only issue. Families and communities need to realise that by disregarding the potential of their female population, they are halving their potential to resolve broader issues such poverty, disease and environmental degradation. Education and gender equality is an issue that affects the whole country.

Sheba: Gender equality is the most important thing for our country to develop. That way both men and women can earn more money and help pull families out of poverty.

In recent years, gender equality has moved to the forefront of global development consciousness, however academics have highlighted that gender equality is often approached as a solely female issue, leading to the disfranchisement of the people (often men) who are in positions to affect change. In rural Bangladesh, getting girls and young women into classrooms or through tertiary education will mean very little if the societal attitudes towards women's education don't change. Similarly, focusing solely on female empowerment will also do very little if the rest of the community doesn’t feel empowered to adapt their ideologies and beliefs. In order to make lasting changes, women and girls must be empowered alongside their parents, siblings, peers and communities to challenge belief systems and structural issues. This can't be achieved without thorough discourse. Through my conversations with them I learnt more about the issues affecting young women in Bangladesh then I had done when working on more conventional education projects in the local area. I know that they felt more motivated to promote change in their communities through being heard and understood. What is needed most pressingly are not higher attendance levels or girls-only groups that stand in isolation but rather real opportunities for communities to engage in safe, sensitive and thorough discourse. This is the most effective way of tackling the attitudes and cultural norms that are stopping young women such as Kona, Sheba, Nila and Merilla from receiving the education that they want and deserve.