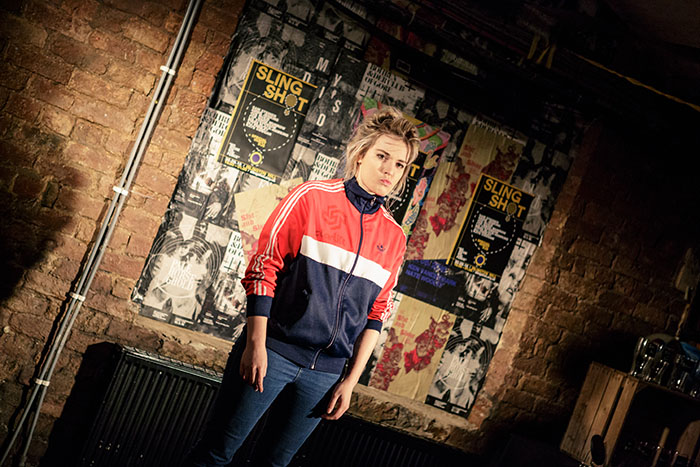 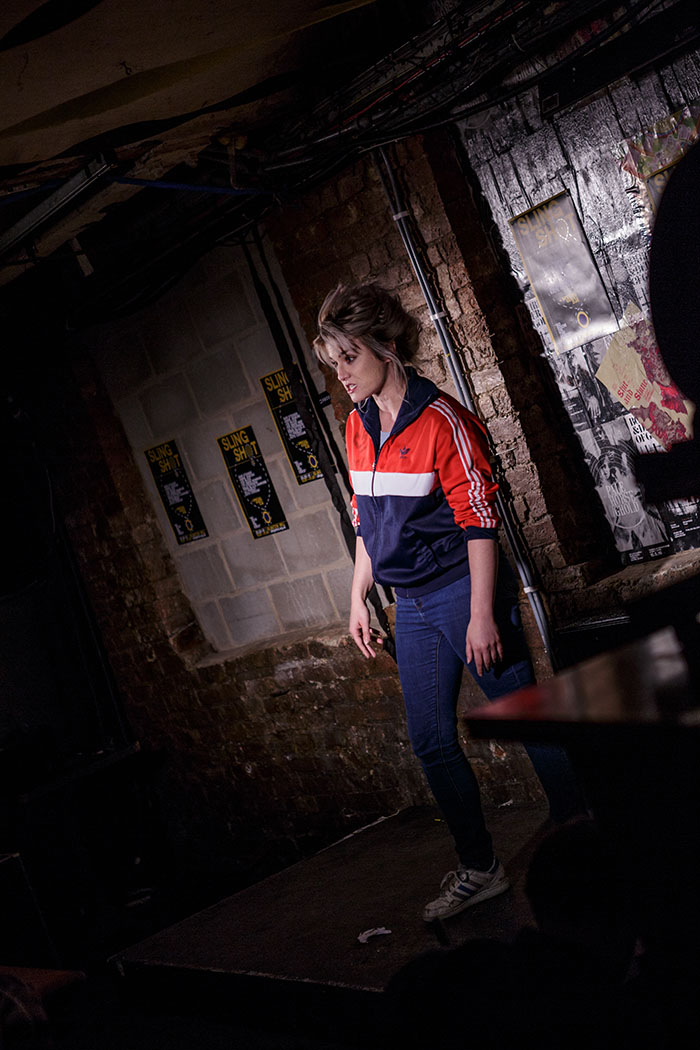 I was recently asked to take part in the first edition of new writing night – Slingshot - in Manchester. Four directors were given twenty-four hours with four actors to rehearse the pieces before they were performed on 30 September 2016 at Salford’s Islington Mill. The following is a statement of the premise by the organiser Piers Black-Hawkins:

“As a collective we got quite frustrated with going to see vaguely political theatre that told everyone what to think and then slapped them on the back for having the same opinions, so we wanted to create the antithesis of that kind of evening. Slingshot is a rapid response night that gives four writers a state of the nation provocation each, and then twenty-four hours to write a monologue as convincingly as possibly that argues the opposite of what they believe. It's essentially an old debating technique that requires people to see the best in both sides of an argument in order to prepare for the counter-argument. As this is drama we're really looking for a human story, not a political essay. Personal, not global.”

My monologue depicts Danielle, a twenty-five year old, who very much disagrees with my provocation, ‘we should protect the vulnerable’, specifically in relation to the Calais refugees. Her belligerence is uncomfortable and offensive, her language extreme and violent. Despite this, I think it is important to consider that many reactionary attitudes such as Danielle’s are born of feeling forgotten or isolated. Sneering left-wing snobbery is not only unhelpful, but can be just as divisive, short sighted and harrowing to endure. As it all kicked off on Facebook in the aftermath of Brexit, I witnessed some really nasty and aggressive language from some of those who voted to remain (seemingly 100% of my Facebook bubble.) Left-wing attitudes are sometimes prone to limited spheres of focus – as exemplified by Danielle’s perception of her sister in the play, or the abusive ‘remainers’ on my own Facebook feed. If we continue to direct anger towards those we fail to instinctively empathise with, we will remain divided. Here Danielle is herself a vulnerable individual and ought to be recognised as such.

I didn’t wanna go down there did I?

When has any good ever come of me trotting my toes over the threshold of that hellhole?

I need someone to represent me on parents evening, I’m getting my projected grades.’

I told her to calm her shit and flush that nastiness out the litter tray or Carol Ann Duffy can do one.

That’s the name of the cat, it’s fucking weird.

I’ve got enough on my hands without a diarrhea-ridden cat repainting the skirting boards with her shitty tail. I’d drown her if I had the time. Or post her live to the Brixton cat killer and he could just get on with it.

I maintain that foundation level kept me grounded.

I’m still talking about English GCSE here, keep up alright. Yeah, I got a D

is a pass, thank you

since June 2007 when have I ever needed to discuss the use of assonance in poems from other cultures?

In ‘Presents from My Aunt in Pakistan’ (which was shit) or

‘Half Caste’ which was only half in English?

subject was English Language but what does that even mean anymore?

No one here speaks English,

or even tries to learn. I’m a fucking ethnic minority at home.

See I’m not an idiot alright, I know what

Does that surprise you?

when you get the rhyme wrong.

Educating Rita’s my favourite film, I love that shit.

I made her fish fingers the other day.

Being thoughtful wasn’t I, she’s

hardly eaten anything for days and she loves fish fingers

we even had them on her birthday once

but she didn’t even really look at them or

which I spose is right but

ask to hold my hand

I say I need the toilet because

Shit. I always do this, get distracted

there’s all these bullet points

so yeah, it takes me a while to get to the point. I’ve got a fucking point alright,

stop looking at your watch or I’ll throw acid in your eyes.

That was a joke, where would I get Acid in Manchester?

It’s like a fucking foreign country here, no one can pronounce anything right, even the white people.

- I know like actually what sort of name is that -

said to Mum at parents evening once

‘Danielle causes frequent low-level disruption, she pays no attention. She is both very distracted and very distracting.’

very pleased with that because she repeated it in my report.

Repetition for effect you see.

I mean I know I talk a lot but I took offence to that.

I paid plenty of fucking attention when we did anything good

worth paying attention to but you get bored don’t you?

You get bored if every minute the teacher’s translating every fucking sentence into baby speak for half the class that don’t understand what the fuck she’s saying.

And what’s the point anyway? It wasn’t like they were trying to learn,

Ten or so Mr Potato Heads in school uniform yeah.

this isn’t about my parents evening ten years ago

- rotting in bed with her fish fingers -

so I had to go and ‘represent’ Mia.

fucking course she is,

and our English appointment is at twenty past four yeah

and I’ve fucking rushed here from the hospital

and I’m here on time.

There’s someone already at the table and another couple of parents loitering behind.

Sorry, my appointment’s at twenty past four and I’ve almost killed myself and our cancer riddled mother

- I basically threw her up the stairs -

in the process to get here on time.

‘What time’s your appointment?’ I say to the bloke in front of me.

‘Your appointment, what time is it?’

I take the bit of paper with all our appointment times listed on it from Mia and wave it in front of him.

‘Danielle, stop it,’ like out of the side of her mouth.

Fuck off Mia I don’t wanna be here for a moment longer than completely necessary, I’m not your fucking parent yet here I am

Our appointment is at four twenty and now it’s half past.

Told you, fucking gormless. I try the other woman standing a bit to the side but definitely waiting to be seen.

She just stares too. Dead behind the eyes.

Where are their fucking kids anyway?

she thinks I’m stupid I fucking hate her.

She shakes the people’s hands in front of her and they get up,

the fucking mute in front of me goes to sit down.

No I’m sorry, my appointment was fifteen minutes ago and we’ve got another twelve to get through after

since when was it necessary to do thirteen GCSEs?

You need three, if that.

‘No, excuse me, what time was your appointment?’ I say to him again,

he looks round then looks back.

I tap him on the shouder,

‘These things always run a bit over, it’s Danielle isn’t it?’

‘then I’m entitled to go first.’

‘Danielle shut up, it doesn’t matter,’ Mia’s trying to drag my arm

‘NO IT DOES FUCKING MATTER, WHAT TIME IS YOUR FUCKING APOINTMENT YOU FUCKING PRICK?

PUSH IN QUEUES, WHICH I SUSPECT YOU FUCKING HAVE

IF YOU DON’T LIKE THE WAY WE DO SHIT HERE THEN GO HOME.

I grab his sheet.

‘I think you need to leave’

that’s all I hear, she said other things, something about ‘tolerate’ and ‘language’ -

if people could fucking use language we wouldn’t have this problem.

this person can’t touch me anymore,

she needs to move from me, I’m gonna be sick

she falls and I run

I can hear Mia shouting my name

I run and run

I get on the tube.

I’m sick on the platform, ‘Oi what you looking at? Fuck off.’

I go to Euston.

I get on the first train I see.

I lock myself in the toilet. People just presume it’s out of order.

And now I’m here and my phone is off

and Mum’s at home and I don’t know where Mia is.

But you can’t do that can you? Push in the fucking queue.

Mia went on a march the other day. Of course she did.

We need to look after these people yeah,

we need to look after them because they’re being bombed

because children are dying

families are being torn apart.

What about my family? My ‘family?’

I’m not a monster

I don’t hate people, I don’t want them to die

but I’m sorry, they need to stay put.

If everyone in this country

if everyone in England is using all their energy

Mia marched for Syria whilst I accidentally burnt my mum in the bath and I didn’t even realise because she didn’t have the strength,

she was too tired to tell me I was giving her fucking blisters.

cat diarrhea streaming down her special pillow like tie dye.

I don’t care if some strangers from another country die.

Fucking cry me a river.

I’m not gonna waste my life trying to sort out theirs. I’m not gonna give up what my passport entitles me to.

Why is this our responsibility?

Terrorists are pissing all over us and we’re asking them where they wanna aim.

We’re offering them bog roll. Fan yourself with our fucking benefit system why don’t you yeah?

It’s the NHS not the GHS, fucking

and getting an A* in English GCSE.

Shut in her fucking room all the time.

I don’t know what you’re looking at pal.