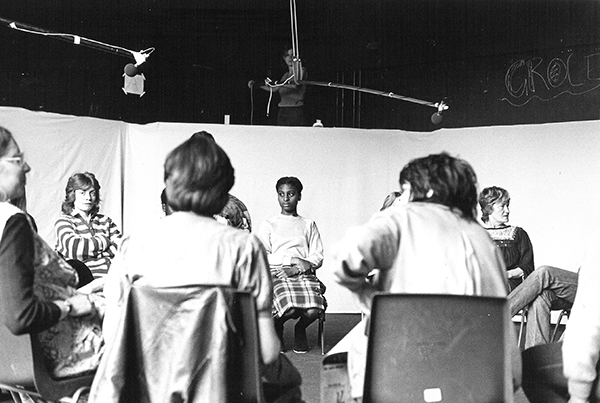 ‘It seems incredibly important to recognise the strategies of formation, the processes in which experience and formal presentation take place. The former not distinct from the latter but as a continuous grasping on the surfaces of the other.’

Cinenova is at this time a volunteer-run organisation (but has not always been), whose materials are based in London, and working practices are dedicated to preserving and distributing the work of women/feminist film- and video-makers. Cinenova currently distributes over five hundred titles that include experimental films, narrative feature films, artists’ films and videos, documentary and educational videos made from the 1920s to the present. The organisation was formed in the early 1990s following the merger of two distributors, Cinema of Women and Circles, both of which started around 1979 or 1980. The impetus for the two organisations at the time was the lack of representation of women film and video-makers, and how this lack could be addressed structurally. Whilst both organisations started from an essentialist approach to gender, this has been transformed during the past thirty-five years, thanks to the work of the many employees and people who have engaged with the organisation, and its politics.

Cinenova is formed of a working group that formed in 2009, which includes, Cay Castagnetto, Emma Hedditch, Karolin Meunier, Charlotte Procter, Irene Revell, Sandra Schäfer, Kerstin Schroedinger, Louise Shelley and Marina Vishmidt. This group manages the business of Cinenova and continually tries to reassess and change it through the different ways we engage the problem of continuing our work. We live in London, New York, Berlin, Zurich, and Twentynine Palms! We meet monthly via the Internet to discuss the daily business of our work, project proposals, and ideas for the future of the organisation, and we each take on the work that is possible and of interest to us.

‘At what point did you realise the politics of your self-difference?’

The group is responsible to the film and video-makers that Cinenova represents. Some of these makers are active and very much in dialogue with the working group; some we have no contact with or contact information for (both is a large part of our ongoing work). The selection of works was made over the course of the organisation’s history. We have decided to commit to this work and assist in its distribution and preservation. The working group shares a desire to see these works, and to talk about them in the context of the cinema, exhibition projects, and educational contexts.

‘We wanted, as far as we safely could, to talk about all the local women we had seen over the summer. This objective was achieved by following the usual practice of sociologists and selecting examples of people to interview ...

If you read articles and things by more radical people, they say that what the researcher is doing is allowing people to speak for themselves, you know, using their voices sort of thing, giving them a voice, and I know I’m not doing that, I’m using people, I’m using what they’ve said to talk about things that interest me.’

One of the more helpful qualities that we might take as a model, influence, or protocol for our practice is the care needed in attending an organisation influenced by feminism, class-based analysis, race, questions of social justice and media representation, while conforming to the legal demands of running a limited company with charitable status in the United Kingdom. This movement between different ideas and practices is crucial to the work we do together, and in the process of doing it we are building relational and communication skills with others. We make no claims towards a radical method; we are doing the work that is necessary for the basic up-keep of the organisation, over a long period of time.

‘I feel ashamed to say I’m a cleaner, I feel useless. Me and Len will argue about this a bit, you know he says I’m doing a useful job, I say I am not, fair enough if there weren’t cleaners like us we wouldn’t, you know, the people wouldn’t be able to use that place, they need cleaners but I’m not doing the work I want to.’

Like many independent film and video distributors, it has always been difficult to survive financially from the small income we have from film and video rentals and sales and politically the work that we support is not always viable in content or form. Some of the work we distribute is not in good shape, and some of the work is the only surviving copy of a work that is in good shape. Rather than hiding these very real material conditions, we try to encourage a conversation about this material; we ask for support and understanding and a deeper questioning of why this might be so. We think it’s incredibly important for the work of the film and video-makers whom we represent to stay together, the collection has become a very specific assemblage, changed over time, and with different hands. But these works should also share screens individually with other, more contemporary or mainstream media, since they are in dialogue with one another.

‘At a new life we took aim, we set the vast conglomerates aflame. The working class avowed its name, of America’s mysteries none remain.
We are born in flames.’

While there are fewer independent cinemas, or film clubs, there has been increased programming of film and video in art contexts and museums, as well as political spaces, and in research practices in higher education. In our current work we try to encourage dialogue around the screenings that we and others organise, through connections with existing groups in the places the work is shown or circulated, and by inviting people to watch, curate, and write about different works.

A digital archive of selected works from Cinenova distribution is available for viewing at The Showroom. Appointments are available Friday and Saturday, 12–6pm, in hourly slots.

A version of this text was published by Camera Austria International in 2015.