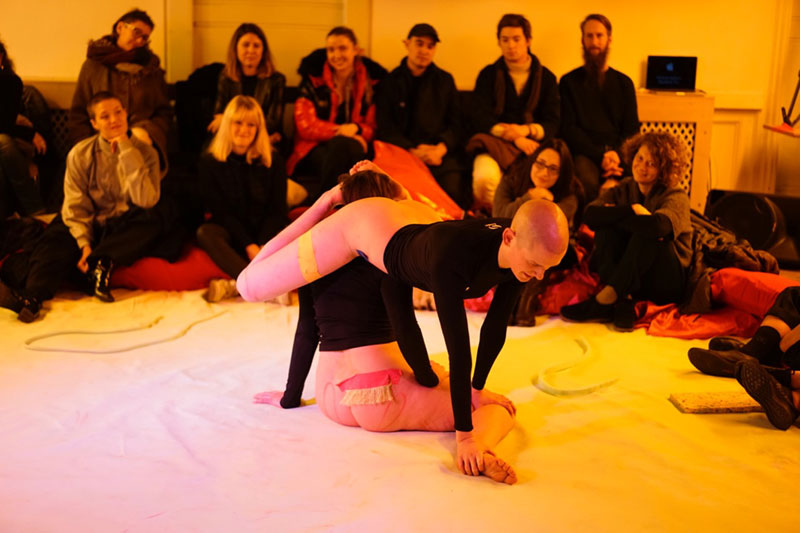 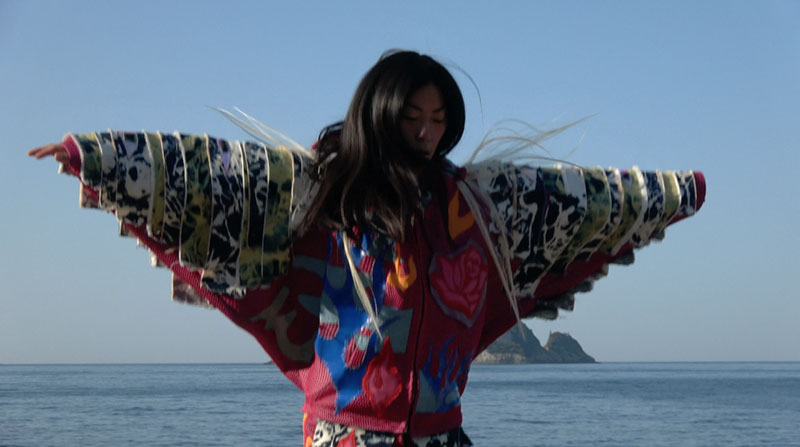 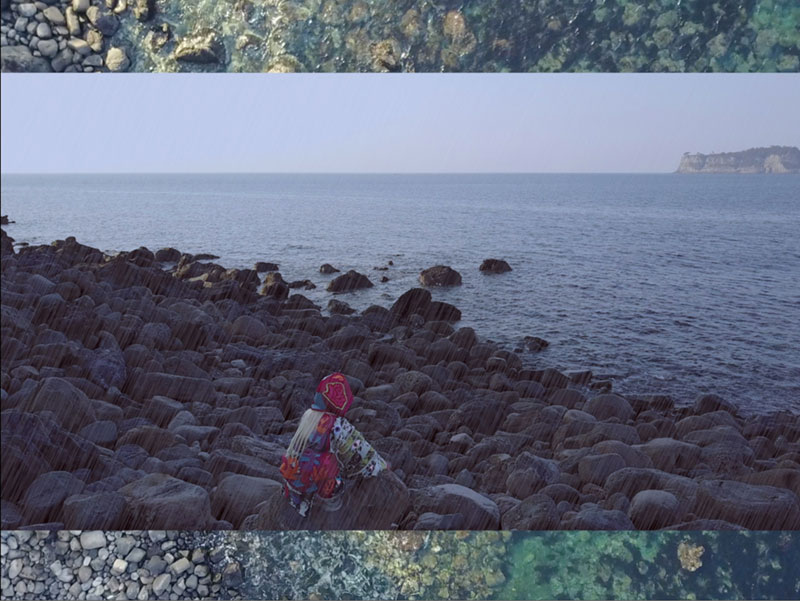 Zadie Xa, The Conch, Sea Urchin and Brass Bell, 2017, still from the film, courtesy the artist 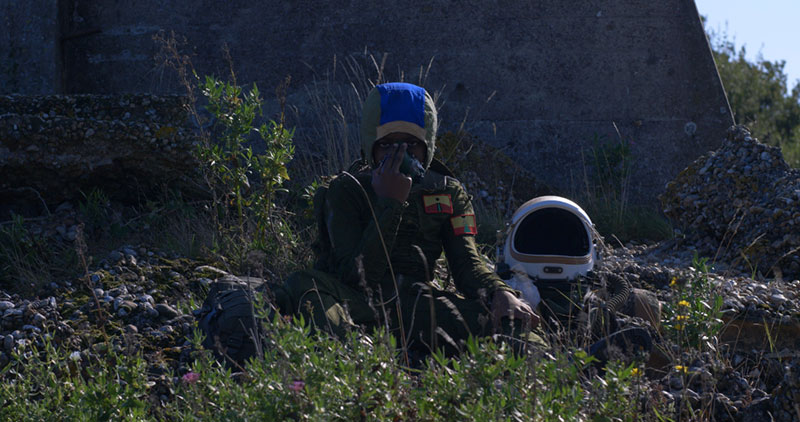 Larry Achiampong, Relic 1, 2017, still from the film, commissioned by PS/Y for Hysteria 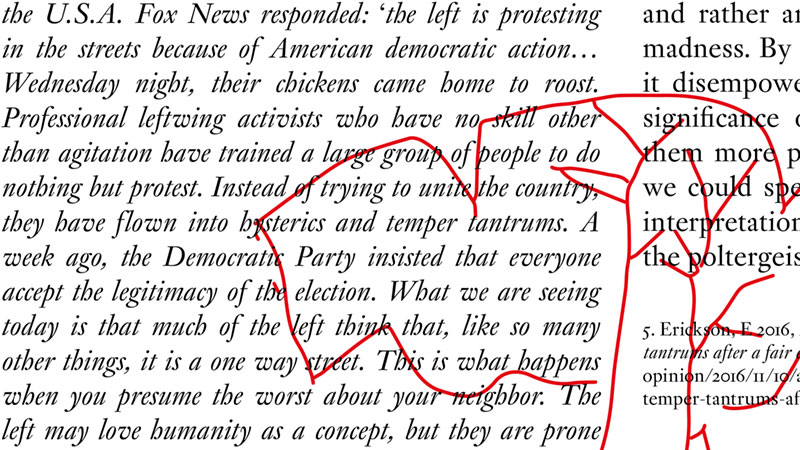 The study of hysteria has undergone many changes. It has been replaced in medical terminology by a cluster of conditions that relate to psychological trauma which manifest physically,such as post-traumatic stress disorder (PTSD), conversion disorder, psychogenic, and psychosomatic disorders. However, ‘hysteria’ remains present in everyday language, maintaining two characteristics that seem to stick to the otherwise slippery definition: the association with women, and its use as a tool to silence any given unwanted minority. From August 2017 to July 2018, I curated the Hysteria programme for PS/Y, working in collaboration with organisations across London to present an itinerant arts programme that included exhibitions, performances, talks, workshops, and publications. The public programme was the culmination of a number of years of collaborative research with artists, scientists, medical practitioners, service users, theorists, and activists, who all contributed towards a rich body of hybrid thinking that manifested in various forms throughout the year.

Responding to the troubling history of the term, the programme drew upon multiple understandings of ‘hysteria’ to explore health and illness in contemporary society, with particular focus on issues relating to gender, race, and cultural identity. The new commissions that were developed for the programme highlighted the contemporary resonances of this problematic term. Defining hysteria is near impossible. Although the concept has been found in written records from ancient Egypt, dating back 4000 years, the word is attributed to Hippocrates (c. 460-370 BC) who coined the term from the Greek ‘hystera’, meaning uterus. During this period, hysteria was considered a disease particular to women caused by disturbances in the uterus: ‘the wandering womb’. The womb was thought to dislocate itself and wander around the body due to sexual frustration, moving to other drier areas, and causing extreme behaviour in the affected woman.

Throughout the history of Western medicine, the study of hysteria continued to be defined by men and associated with women: the male gaze of society observing and analysing female bodies and behaviours. Perhaps, most famously with Dr Jean-Martin Charcot’s studies at the Salpêtrière in Paris during 1825–1893, where his photographs aestheticized the image of the hysteric women. The most iconic images of Charcot’s are of Louise Augustine Gleizes, known as ‘Augustine’, who was photographed extensively while as a patient at Salpêtrière. Later, Charcot’s apprentice Sigmund Freud (1856–1939) further conceptualized hysteria, developing theories around psychoanalysis through the famous case studies of Anna O and Emmy von N.

Conscious not to repeat this century-old tendency to associate hysteria with women, the Hysteria programme did not examine this relation directly until February 2018, over halfway through the year. As a radical reimagining of this gendered power structure, Florence Peake and Eve Stainton’s collaborative project Slug Horizons explored the expressive potentialities of women’s bodies, through intimacy, touch, and collective reclaiming. Peake and Stainton developed their new performance through a residency at CoolTan Arts—an arts charity for adults who experience mental health conditions—during which they invited CoolTan’s ‘Women Make Art’ group to participate in a series of workshops exploring synergic movement and sound-vibrations.

Influenced by the invention and popularisation of photography, a general understanding that ‘truth’ was observable on the surface of the human body spread in the late 19th and early 20th century. Differences in appearance held symbolic value, and the Western gaze typically considered anyone who looked other than white, male, and European to be less intelligent, less healthy, less worthy, and so on. Therefore, race, as well as gender, became a signifier of hysteria. For example—as Sander Gilman writes in his essay ‘The Image of the Hysteric’ (1993)—during the 1930s, hysteria was understood as a particular predisposition affecting the Eastern Jewish male, an assumption that later included other non-European cultures.

The Hysteria programme had opened with the exhibition The Conch, Sea Urchin and Brass Bell by Zadie Xa at Pump House Galley. For this—her first solo exhibition—Xa focused on issues of gender, race, and cultural identity, through the lens of colonial heritage and Asian diaspora. The exhibition narrated a displaced body’s return to a ‘homeland’. Each level of the gallery marked a different stage of the journey, in which the protagonist searches for an understanding of belonging, but instead finds a concoction of excitement, rejection, and bewilderment. The titular moving image work—The Conch, Sea Urchin and Brass Bell— interlaced imagined and learned Korean folklore, in search of a reflexive space in which diasporic knowledge can be transformed into new realities. Filmic flashbacks, almost recognisable figures, and looping dream states invited the audience to join Xa on a journey through her own memory, Korean cultural memory, and possible future scenarios.

By opening the programme with this exhibition, Hysteria started with an emphasis on notions of diaspora, the idea of the Other, and shapeshifting as strategies for resistance and healing. This exploration of hysteria as a diasporic term continued with Larry Achiampong’s commission Relic 1, which premiered at The Chapel at King’s College London. Through research with the psychiatrists and professors Sander Gilman and Sashi Sashidharan, Achiampong addressed contemporary society’s colonial legacies—including scientific, institutional, and political racism—in his moving image work. Relic 1 is set in a seemingly desolate United Kingdom, where a child-like protagonist apparates across the landscape, uncovering fragments of data that bear testimony to a forgotten Empire. The film invites its audience on a journey consisting of moments that are simultaneously claustrophobic, traumatic, poetic, and sublime. Using science fiction and computer game terminology, these constructed and yet familiar feelings of otherness embody situations of colonial hysteria. With this work—which he dedicated to those who were killed and those who were made homeless and displaced by the Grenfell fire—Achiampong directed the conversation around hysteria towards a highly contemporary political problem.

The term ‘hysteria’ is often used in everyday language and contemporary politics. Recently, anti-Trump and anti-Brexit protesters have been labelled hysterical in the media. Cally Spooner’s commission—which took form of the solo exhibition Soundtrack for a troubled time and notes on humiliation at Whitechapel Gallery, and several lectures on Display (managed tears, unscripted skin, riots), a daylong collection of lectures and performances at the Anatomy Lecture Theatre at King’s College London—approached hysteria as an exploration of the contemporary iterations of the medical term, looking for parallels in contemporary society and politics.

At Whitechapel Gallery, Spooner created a poster series that transcribed extracts from her interview with psychiatrist and clinical lecturer Isabel Valli. Spooner and Valli’s conversation journeys through notions of HPA (the hypothalamic-pituitary-adrenal axis is the main system that controls the production of the hormones mediating the stress response), Hippocampus (a major component of the brains of humans and other vertebrates that plays important roles in the consolidation of information from short-term memory to long-term memory), Humiliation, and Riots. The posters are overlaid with drawings of human organs that produce the stress hormone: cortisol. In order to understand hysteria at a societal level, Spooner and Valli probed ideas of pre-verbal communication, trauma, apocalypse and protest, asking how these conditions can be captured and made visible, either as fact, fiction, or the symbolic. In several lectures on Display (managed tears, unscripted skin, riots) Spooner brought together Valli, professor of French and German studies Naomi Segal, the philosopher Federico Campagna, and the OFFSHORE company of dancers and performers, to explore physical conditions that are psychosocial in origin, and which display themselves in response to psychological stressors or conflicts. Beginning with human skin, and then expanding the scale to humiliation and nervous breakdowns at a societal level, the day explored how the historical and embodied character of experience arrives ‘hysterically’ in contemporary life.

These projects represent some of the many ways in which the Hysteria programme brought together multiple voices and perspectives to create a new body of ongoing research around this complex and contested term. In presenting a programme of art commissions, Hysteria reimagined Charcot’s understanding of hysteria as a subject that could be approached through an artistic medium. However, in this case, the bodies were live, manifold, and speaking back.