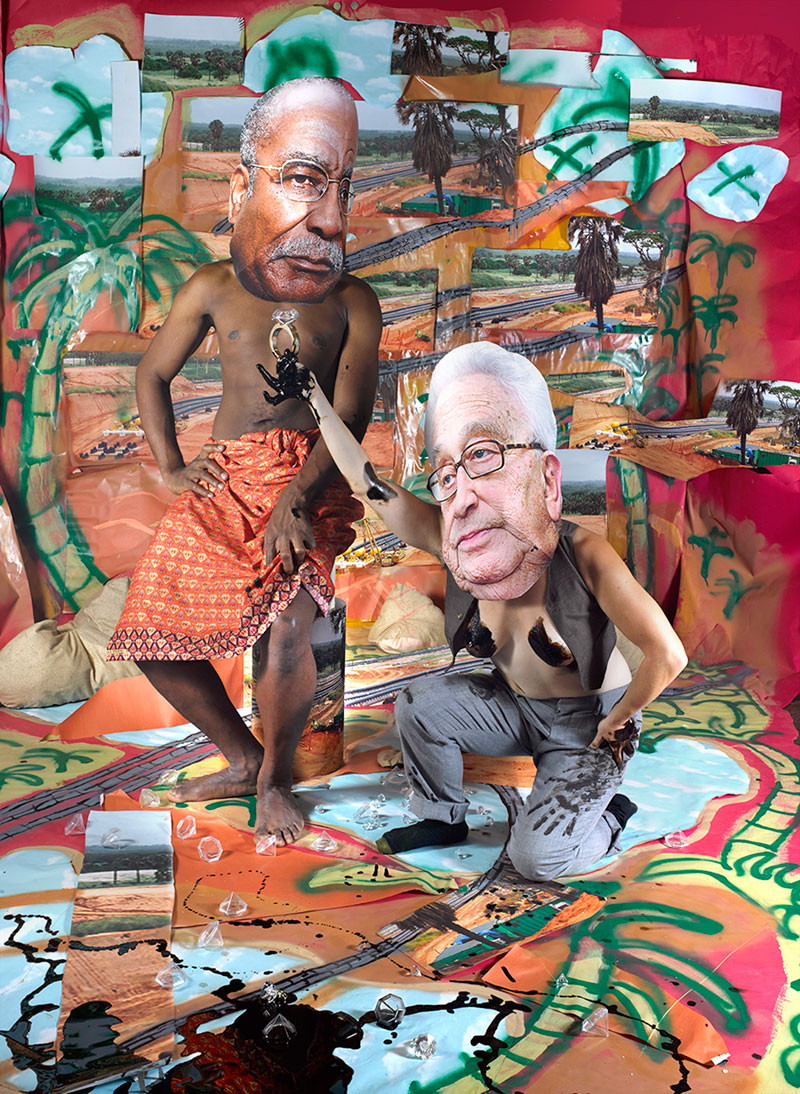 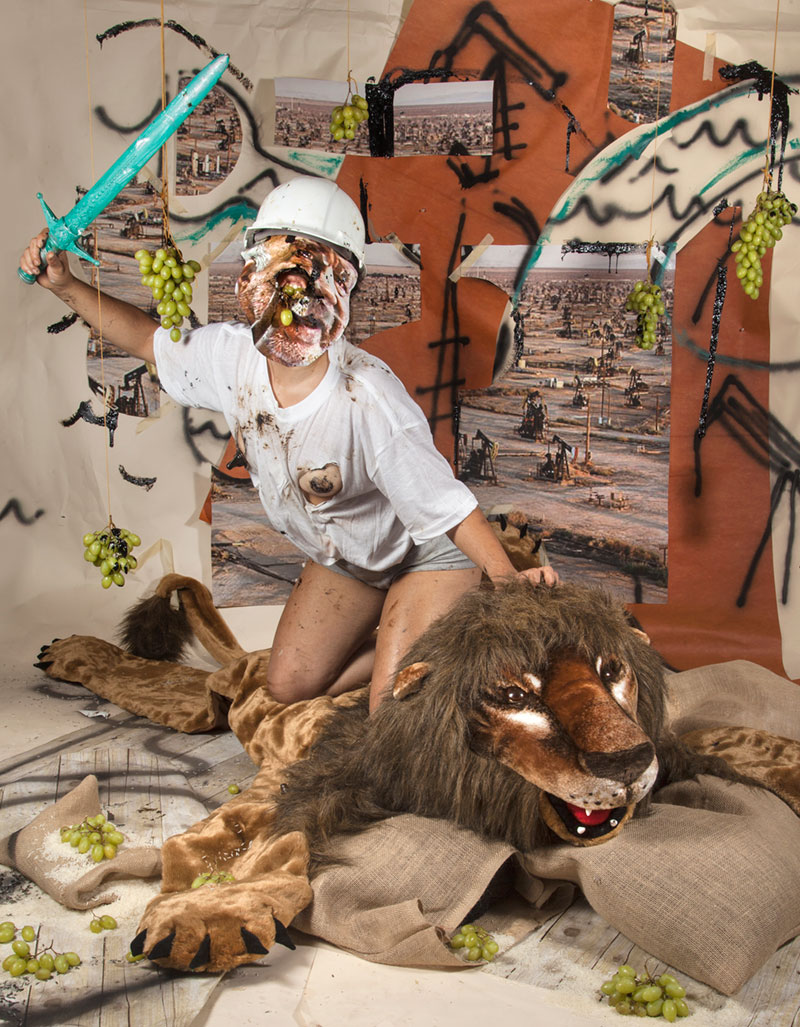 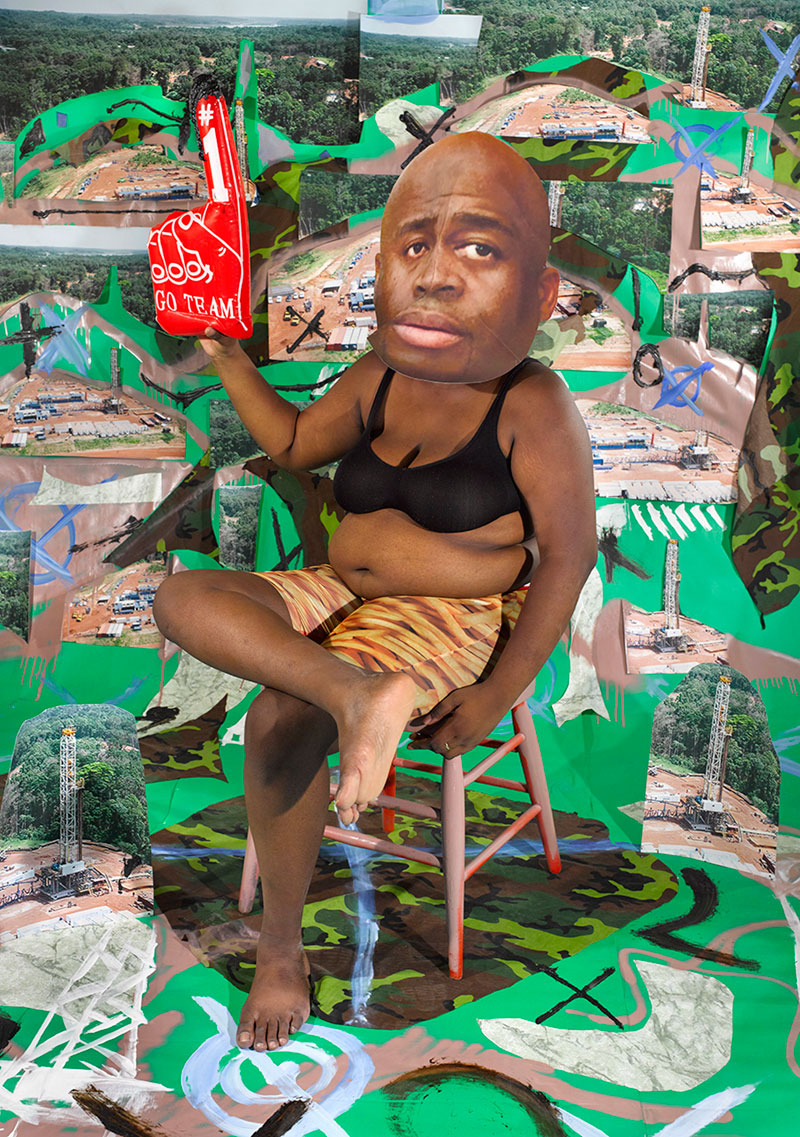 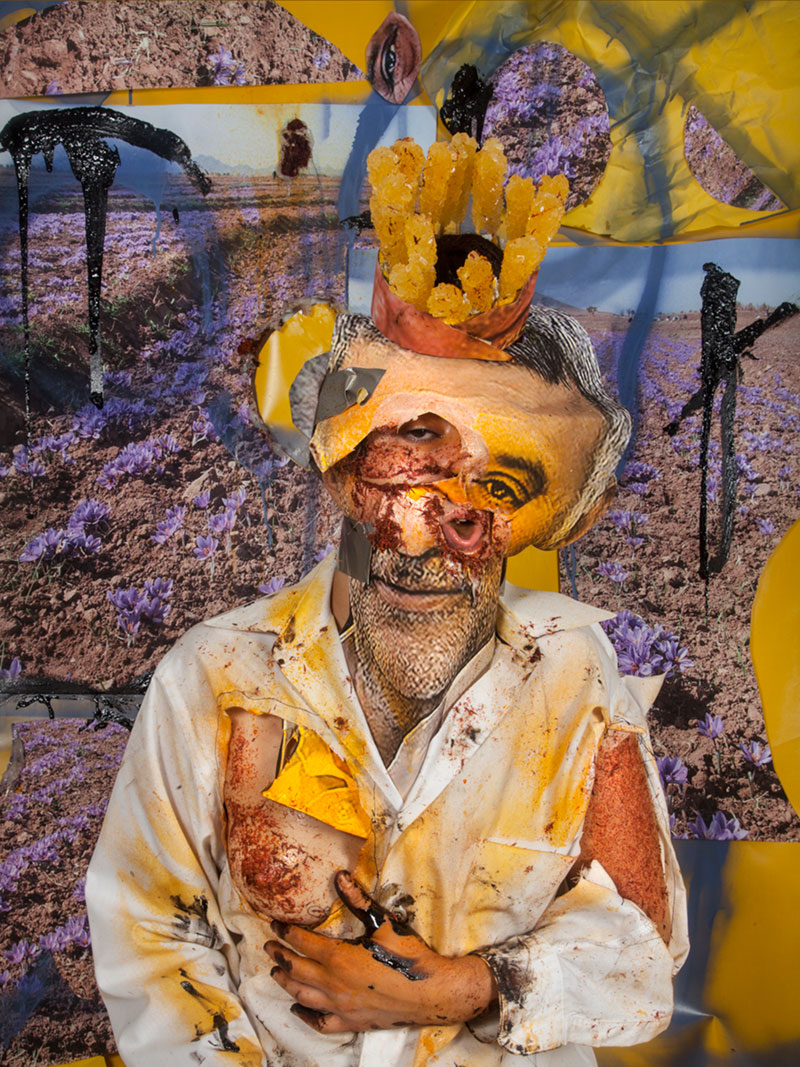 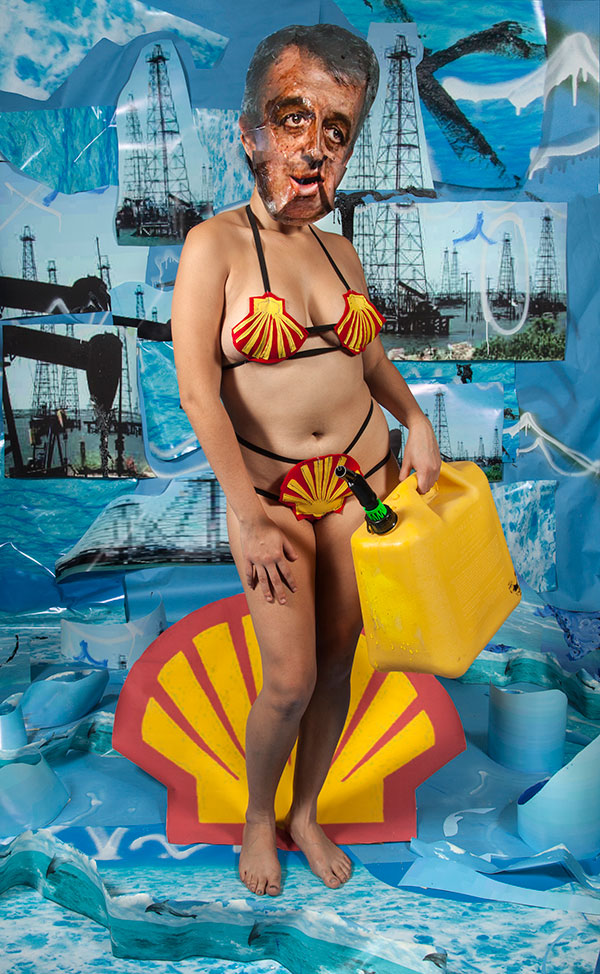 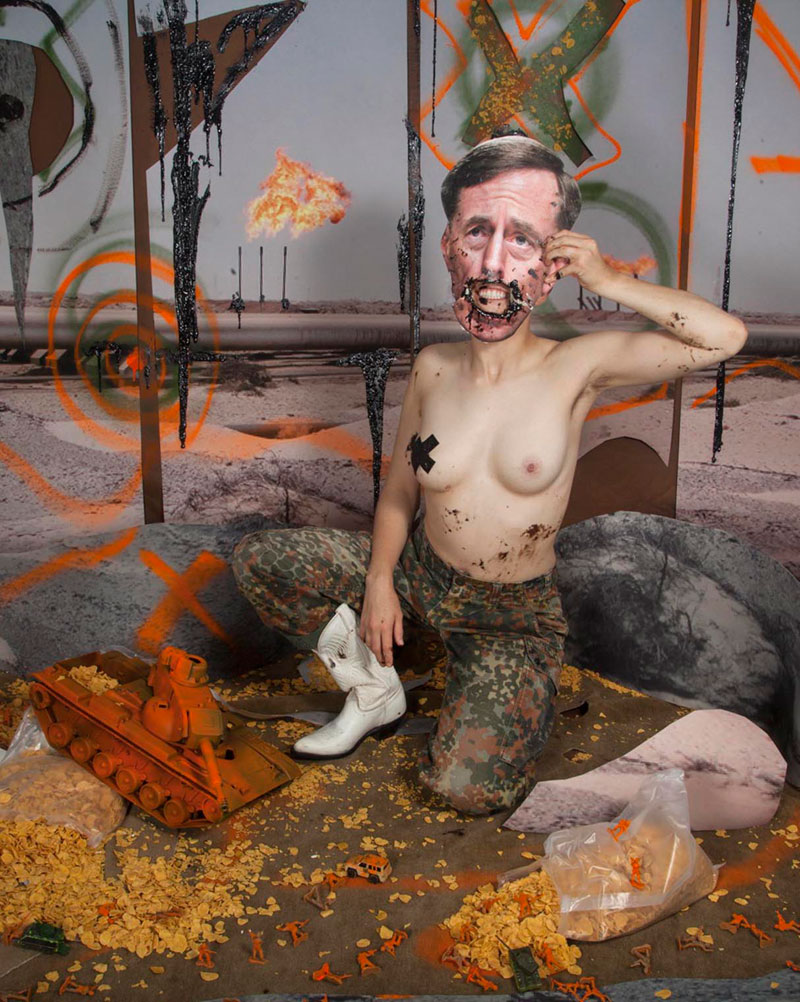 All images courtesy of Sheida Soleimani

Sheida Soleimani’s photographs and videos are both acerbic and illegible. The oil, the Shell logos, the hijabs, the keffiyeh, the doms, the subs, the queer bodies, and the caricatured faces of politicians: together, these referents clearly speak to power dynamics at once gendered and geopolitical. Many of these cultural motifs read, to most Westerners at least, as pan-‘Middle Eastern,’ and while the specific actors and scenarios remain elusive, the sort of corruption and abuse of power the photographs embody is all too familiar.

In Medium of Exchange, Soleimani considers relationships between Western military leaders and leaders of oil-rich countries by way of a series of photographs and screenplays. The latter are pictured by way of their official portraits on www.opec.org—OPEC is the Organization of the Petroleum Exporting Countries, and includes Iran, Iraq, Kuwait, Saudi Arabia, Venezuela, Qatar, Indonesia, Libya, United Arab Emirates, Algeria, Nigeria, Ecuador, Angola, and Gabon. The organization’s mission is to unify member countries to defend the price of oil. In Soleimani’s work, the small, official portraits are printed larger-than-life and worn as masks often by anonymous, androgynous bodies who reenact and exaggerate various historical scenarios between OPEC Oil Ministers and leaders of non-OPEC nations involved in oil-trade conflict.

In her studio, Soleimani translated to me each specific person and scenario reenacted, reprinted, and reconfigured in Medium of Exchange. This essay on the series could easily be one of explication, a didactic text explaining each scene and figure, but it is instead a meditation on the productivity of the images’ illegibility, which speaks more broadly to our heavily mediated and fragmented experiences of political narratives.

Her images are illegible in two ways: first, at times, it is difficult to discern exactly what you are looking at, and surprising to learn the works have not been digitally collaged. Instead, the artist prints out images—many sourced online, from the news, from opec.org, and the like—and refashions them as objects, which are staged in tableaux. In other words, the viewer is often faced with pictures of pictures—interspersed with pictures of live bodies and three-dimensional objects before Soleimani’s own camera.

This formal technique has been explored by a few artists of Soleimani’s generation, and is unique to our current technological moment in that it is enabled by the easy and rapid proliferation of digital image files online. This is not to say it is without precedent: Adrian Piper, for instance, re-photographed and re-printed images of women from Ebony magazine with an analog camera as part of her video installation Out of the Corner (1990). Soleimani’s formal technique is also in dialogue with her contemporaries in photography: take Daniel Gordon, who has printed digital photographs of objects only to wrap them back onto the original object itself, which he then re-photographs; his subject matter is typically still lives. Lucas Blalock has created similar worlds in a digital space. Also depicting still lives, Blalock pastes, repeats, and layers parts of an image over itself, using Photoshop not to create illusions—for which the program was designed—but instead to create entirely new compositions that don’t have to obey the laws of gravity or the ordering of real space.

Soleimani’s contemporaries like Gordon and Blalock take as their subject the medium of photography and issues of representation, but avoid any overtly political content associated with such issues. But the mutability of representation, as Soleimani’s work demonstrates, is always political. Several of the photographs succinctly refer to photographic representation as an always-already political act: by putting red X’s on aerial photographs of oil fields, she evokes both marks on a battle map and the red crayon marks photographers put on contact sheets to indicate which negatives they don’t want printed. Tactical decisions for plotting a battle plan are thereby equated to the editorial choices for printing images.

One ‘battle field’ adorned with red X’s is Ghawhar Field—the largest oil field in the world, located in Saudi Arabia. The richest OPEC nation, Saudi Arabia is also home to severe human rights violations. When confronted by the United Nations about such violations, Saudi Arabia denied the allegations, or defended them as ‘traditions.’ It threatened to cut off its oil supply if the U.N. failed to remove it from their watch list, and the U.N. acquiesced. Accordingly, in her photograph Minister of Energy, Industry & Mineral Resources, Saudi Arabia & UN Secretary General, Soleimani has figured Saudi Arabia as a dom and the U.N. a sub—succinctly capturing how often times, with money comes power comes abuse.

Another sense in which Soleimani’s work is productively illegible is in the untranslatability of its symbols, including unknown figures and unfamiliar cultural referents. The scenarios portrayed are extensively researched by the artist, meaning that her experience of the scenes she represents tend to also be mediated and fragmented. Soleimani was raised in the United States by two Iranian political refugees. Her parents were persecuted for their pro-democracy actions—her father for his activism against the Ayatollah Khomeini's totalitarian regime, and her mother while he was in hiding. Soleimani herself has never been to Iran, and will likely never go—the critical nature of her art has been met by death threats from members of Basij, a voluntary militia. So it is not simply that some of the referents might be illegible to a Western audience; the artist is also exploring her own mediated relationships to the stories and power dynamics she’s depicting. She is also taking on scenarios too complicated, and receiving too little representation in mainstream media, to simply illustrate, opting instead for a more fragmented representation. Her own highly-mediated research process is made visible through her printed, marked-up, and pixelated images; her relationship to the content, like ours, is revealed to be one at a remove.

The title of the series, Medium of Exchange, reframes oil as a form of international currency. It is “black gold,” a liquid asset in the literal, material sense. The substance slithers across geopolitical contexts, but our experience charting its path is a mediated one—experienced through fragments of news bites rather than as a clear and direct narrative. Looking at the work, I can’t help but thinking of the black oil as a lubricant—a substance enabling global promiscuity and all of the complex power dynamics that entails, resulting in pure joy for some but utter abuse for others.

Emily Watlington is a 2018-2019 Fulbright Scholar. Previously, she was the curatorial research assistant at the MIT List Visual Arts Center. Her art criticism has appeared in numerous publications including Frieze, Mousse, Art Review, The Brooklyn Rail and Art Papers. In 2017, she received Vera List Writing Prize for Visual Arts. This text was originally written to accompany Soleimani’s exhibition at CUE Arts Foundation in New York (5 June - 14 July 2018).

Sheida Soleimani is an Iranian-American artist who lives and works in Providence, Rhone Island. The daughter of political refugees who were persecuted by the Iranian government in the early 1980s, Soleimani makes work that melds sculpture, collage, and photography and highlights her own critical perspective on historical and contemporary socio-political occurrences in Iran. She focuses on media trends and the dissemination of societal occurrences in the news, adapting images from popular press and social media leaks to exist within alternate scenarios. 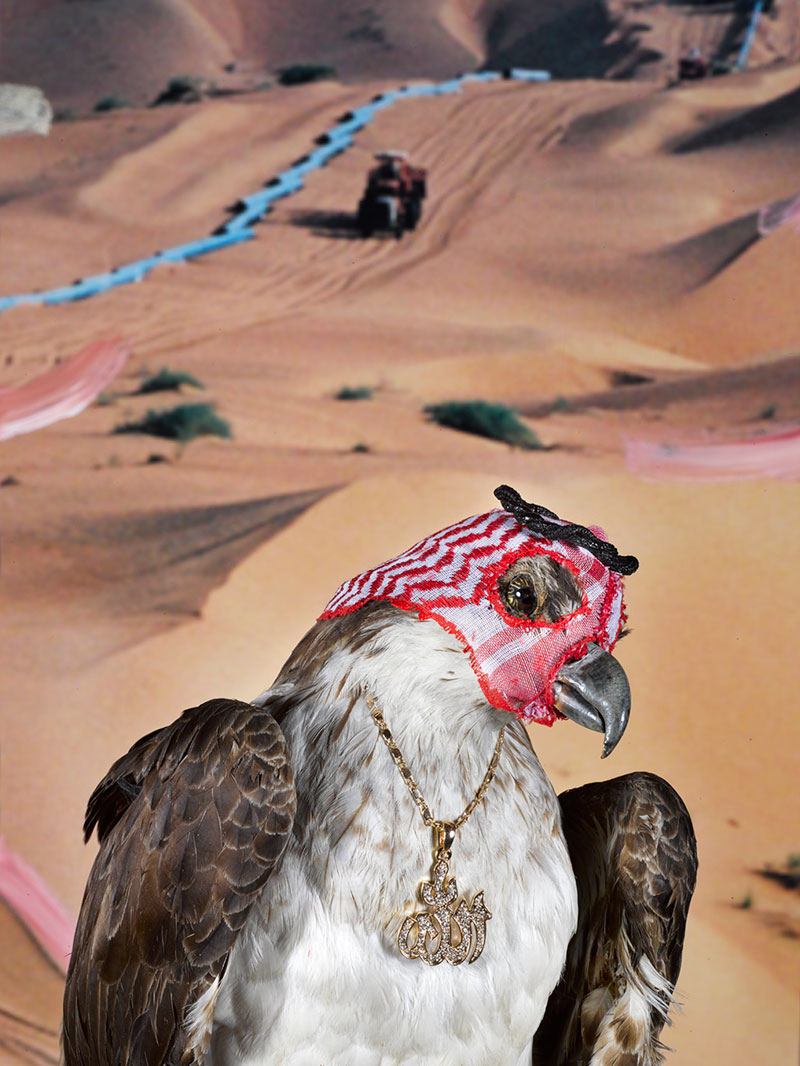 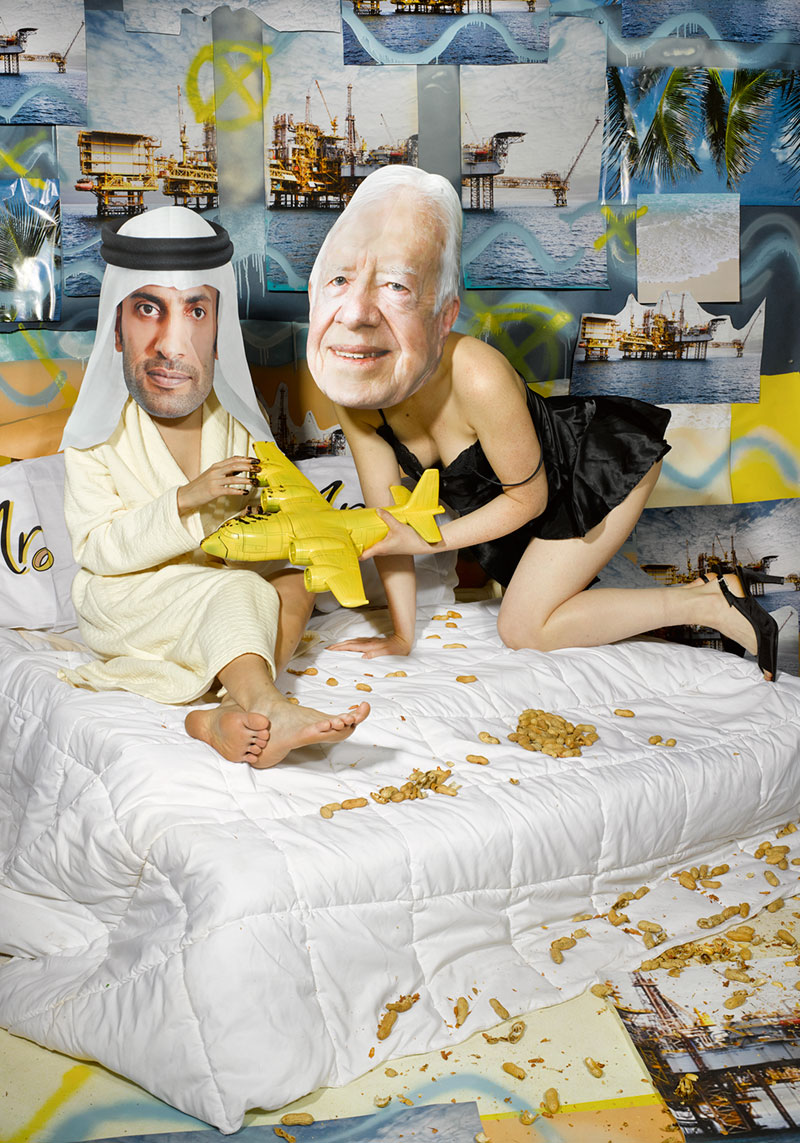